A glance into the past – with a glimpse into the future

by our founder Dr. Johannes Ebert 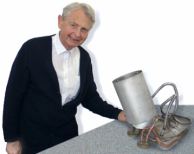 The history of modern optical coating starts somewhere in the early part of the last century with the advent of high vacuum technology, one basic necessity for thin film deposition. Credit for the design of the first high va­cuum pump (mercury-vapour condensation pump) belongs to Wolfgang Gaede, who filed a German patent application in 1907. Using this technique Robert Wichard Pohl produced thin silver films for Fabry-Perot applications two years later.

In 1934 Gerhard Bauer deposited films of alkali halides and noted their low reflection on quartz substrates. Only one year later Alexander Sma­kula introduced this discovery into the production at Zeiss-Jena. Bauer recognized that his films were less than perfectly dense, but were sufficient enough for the most optical instruments from camera to photocopier.

However, increased sophistication of optical instruments reinforced the search for high quality optical coatings. In 1985 using an electron microscope Karl H. Guenther could show the columnar structure of evaporated films. Voids running parallel to the columns contri­bu­te significantly to the undesirable qualities of the films. When compared to their bulk materials evaporated films are softer, weaker, less dense, and chemically less stable. They show internal stress and absorb more gases and water. Optically they have lower refractive indices, higher extinction coefficients and increased scatter.

Using standard techniques like Thermal Evaporation TE and Electron Beam Evaporation EBE cost effective coatings can be ma­de for a broad application range. However, as a result of their microstructure the thin films have a few disadvantages. Some of these problems can be solved by advanced (though more expensive) deposition technologies like the follo­wing.

Ion Assisted Deposition IAD introdu­ced by the well-known "Ebert-gun" was a first approach to reduce the porosity of the coatings. But it was suitable for small facilities only.

Newer Kaufman-ion sources were able to stri­ke large areas. The drawback of these ion sour­ces is their filament, because tungsten is co-eva­po­rated and the coating thickness is limited by the life time of the filaments. The new ion accelerator of Loeb supported by a gas discharge in magnetic fields was constructed for satellite navigation and was working sufficiently first as an ion sour­ce in IAD and later in our IBS plants.

Ion Plating IP delivers very hard layers due to high ion impact during deposition, comparable with coatings made by Magnetron Sputtering MS. Both methods can be used for applications where no porosity and high hardness as protection against particle impact are demanded.

Ion Beam Sputtering IBS is a low rate process which gives the highest layer quality: On super-polished surfaces a reflectivity of 99.999% can be realized with absorption and scatter losses lower than 10 ppm. Additionally we developed the IBS method for 2 m long substrates in order to meet the needs of the producers for semiconductors and flat panel displays. Large round optics with a diameter of up to 550 mm can be used as well.

LASEROPTIK is ready for the future! 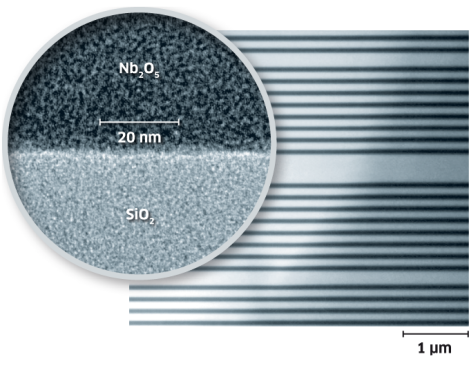